Beekeeping - before and after all wars

These are the stories of beekeepers whose lives and beekeeping practice were changed by isolation and wars in former Yugoslavia. Dimitrije and Savo from Bosanski Brod look back on the times when they could move their bees to rapeseed flow in Slavonia, acacia on Cer Mountain, linden and sunflower in Vojvodina, heather in Lika.

Mother Nektarija, the head of the orthodox convent of nuns of Kalenic monastery, talks about beekeeping tradition in Serbian monasteries, about bees as godly creatures and about what men can learn from bees to be closer to God and themselves.

We heard the life story of Luka from Bosanski Brod who almost lost both his sight and hearing in a bomb explosion, but is still a beekeeper, thanks to his wife and son helping him.

The destiny of a young girl from Usce, who lost her leg as a 12 year old when a bomb exploded in their apiary, is movingly told by her father Milun.

The author chose to end the film with the story about a young beekeeper Marko from Bosanski Petrovac, whose childhood and youth were marked by war and being a refugee. Marko talks about his bees, his plans and the importance of beekeeping. As a boy during the war, he was a refugee in Nakovo Vojvodina, with Nedja Keranovic, a famous beekeeper who taught Marko the skill of beekeeping and gave him several hives which Marko used to start his own apiary.

And the final scene of the film - the cheerful buzz of bees gathering in a small swarm with which they begin the new life.

Apart from Mother Nektarija's story, there is only one character in the film that is not directly connected to the war. Budimir, an experienced beekeeper from Trstenik, continued with beekeeping after he lost his sight due to diabetes. His story is connected to several others by describing enormous understanding and invaluable assistance of Budimir's wife. Unlike Mother Nektarija, he speaks about the relationship between men and bees at secular level, which nicely concludes the subject.

It was a real pleasure to see the images spotted by the eye of Ben, the young cinematographer. The scenes of willow seeds flying or low clouds on the mountains near Usce, where NATO planes bombed an apiary, are especially strong moments of the film which speak more than any words. The film is very poetic. The author skillfully combines the beekeepers' stories with their characters and scenes on the screen. Moreover, the excellent cinematography makes magic, making 52 minutes pass before you know it.

Tomas graduated at Film production in Great Britain in 2002. He has been making documentaries and commercials in Europe, but also in Africa and South America. He made a lot of various and excellent films, awards for which are to come. His films have been shown in festivals around the world, from Moldavia to Uruguay.

Let's hope the author will continue developing his high sensitivity for the world around him and make many exceptional films.

Pictures from the film: 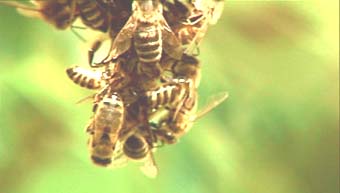 If you like, you can look at the pictures from the filming 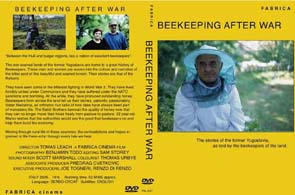